Wolf Guy started out as a manga in the early 70s and ran for eleven volumes. A year after it ended, a live action film came out. Almost two decades after that, J.C. Staff dug it up to make an OVA. Yes, the same studio behind Potemayo, Honey and Clover, Love Stage, Yami no Matsuei and many others. So, the OVA came a bit late all things considered. But was it good? Let’s take a peek at this OVA from the early 90s and find out. We open with a scene of a kid watching who we presume is his parent get killed. Move forward to a scene with an injured man in a hospital. Shift scene to random people we know nothing about, unless they show up in the manga, saying that Inugami Akira might be alive. The man in the pair is contacted by someone who tells him that Inugami Akira is alive and asks him to meet her in a specific place at a certain time. He responds in the most level-headed way he can think of. He runs her car off the road so that she can answer the questions she was going to answer at the rendezvous. Wait, what? This basically leads to the beginning of the quest to rescue this guy.

It also brings up one of the two biggest problems with the narrative. A lot of the major events are nonsensical. It’s not just the “running someone off the road and drawing attention to the secret meeting” thing either. There’s a bit where two characters are tunnelling over a secure installation with power drills and, somehow, no one hears them. Even though they can hear the commotion above. Even when they’re literally breaking down a wall behind some people. No one notices until it’s too late. Incidentally, the tunnelling scene also involves a woman going completely stir crazy and the only explanation for it is that “well, she’s a woman.” We also have two characters trail a third in a car. He glances at the car so they decide they need to switch cars. A bit of an over reaction there, isn’t it? I mean, you guys are in a crowded parking area. It’s not like he has any reason to suspect you’re there for any reason besides patronising the businesses. Just to make this plot point even more pointless, they immediately attack him after getting the new car. We also get some completely pointless plastic surgery that never comes into play in a significant way. Possibly the worst, though, is when a certain character gets drugged, raped and impregnated and they let the sixteen year old with a crush on her decide what to do about it because she’s still catatonic. No. Just no. You don’t let a sixteen year old make that decision. You find a relative. If she has no relatives, you let a medical doctor decide what would be best for her as a patient because sixteen year olds don’t make good decisions and this one certainly doesn’t make the decision that’s best for her. Quite the opposite. He makes the worst possible decision.

The second massive problem is the general treatment of women in the series. Wolf Guy loves to show its female characters abused, sexually and otherwise, for cheap shock value. Expect a lot of incredibly tasteless, crass sexual stuff. I get the feeling that Kazyumasa would have gotten along well with Frank Miller. Then we have the “romance.” It basically consists of women falling instantly in love with guys for no adequately explored reason. Then we have the ending. The ending is set up as “tragic” but it doesn’t work. For one thing, the tragedy comes from our “heroes” being inexcusably stupid. For another thing, it’s predicated on us caring about a character who we know basically nothing about.

The cast in this is really badly written. You might have been able to gather part of that from all of the story problems that stem from the characters acting inexcusably stupidly but it also goes beyond that. Our main protagonist is supposed to be someone we like and root for but he’s, frankly, despicable and an annoyance. The only reason we have to root for him is that the major antagonist is an actual rapist and just one of those “evil for the evils” villains. 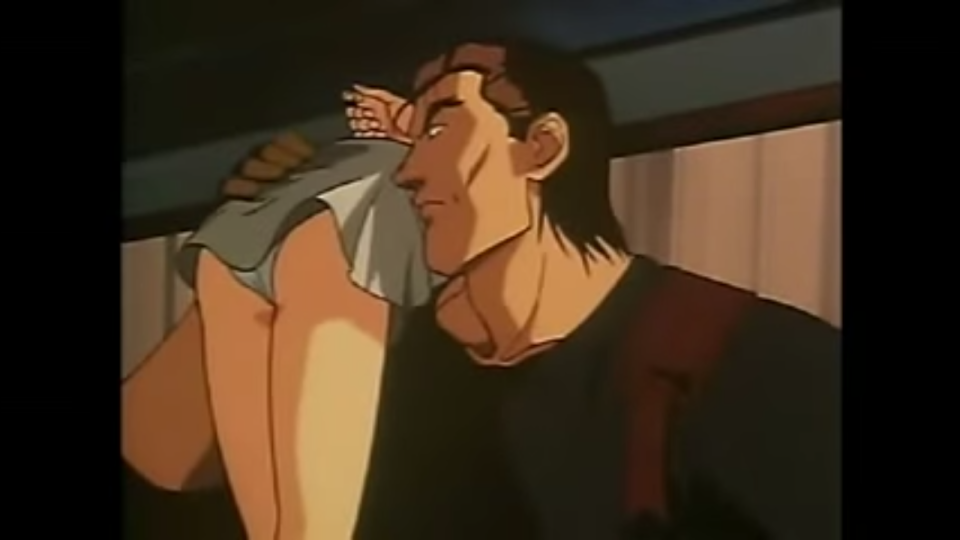 The artwork is pretty bad. It’s not as incompetent as most aspects of the series, but it’s pretty bad. We get a lot of gratuitous bum shots of female characters. The facial expressions look bad. The action scenes aren’t well done and there’s just a lot of general laziness.

This is one of those works where they got some good actors including Toshiyuki Morikawa (the voice of Sephiroth) but a combination of poor direction and there being nothing for them to work with makes them sound like they can’t act. The music is the best part of the OVA. The opening theme tune is pretty decent and the rest is bland, but at least it’s not bad.

So, that’s Wolf Guy. All in all, it’s absolute garbage with no redeeming qualities and I loathed it. Every audience insulting, idiotic moment. I can’t really recommend it to anyone. It may not be the absolute worst anime I’ve reviewed, but it comes close. My final rating is a 1/10. Next week I’ll look at Azumanga Daioh: The Animation.