chances are you’re at least passingly familiar with The Muppets,  a franchise created by Jim Henson and based around a lovable cast of quirky puppets. The Muppet show started way back in the mid-70s and was a rousing success. It spawned a lot of films, specials, sequels and more. Today, I’m going to be looking at a direct to video instalment, Muppet Fairy Tales. It was released in ’94, a couple years before Muppet Treasure Island. We  open with Gonzo the whatever and Rizzo the rat introducing the idea for the film. A series of fairy tale adaptations based on the Three Little Pigs, King Midas, The Boy Who Cried Wolf, Rumpelstiltskin, The Emperor’s New Clothes & The Elves and the Shoemaker. All told in the iconic Muppet style.

That might be the biggest flaw with the work. We have six different fairy tales, and a variety of transition shenanigans, in around an hour and a quarter. As a result, it doesn’t feel like they take full advantage of any of the scenarios.

That being said, what they do have is pretty solidly done. The meta humour is nicely executed and there are a lot of really funny scenes. The way they learn Rumpelstiltskin’s name, Ms. Piggy against the big bad wolf & Rizzo tricking Emperor Fozzie are all great moments that lead to an enjoyable viewing experience.

I can’t really claim they include all your favourite muppets in this. The main ones we see are Gonzo, Rizzo, Kermit, Piggy, Fozzie & Robin. There are several noticeably absences like Rowlf, Sam & Electric Mayhem. I’d include Tim Curry but he wouldn’t become an honorary muppet for a couple years. Honestly, I  think they made the right call. They don’t need every single character to show up just for the sake of having them and the cast they have works well for what they’re doing. 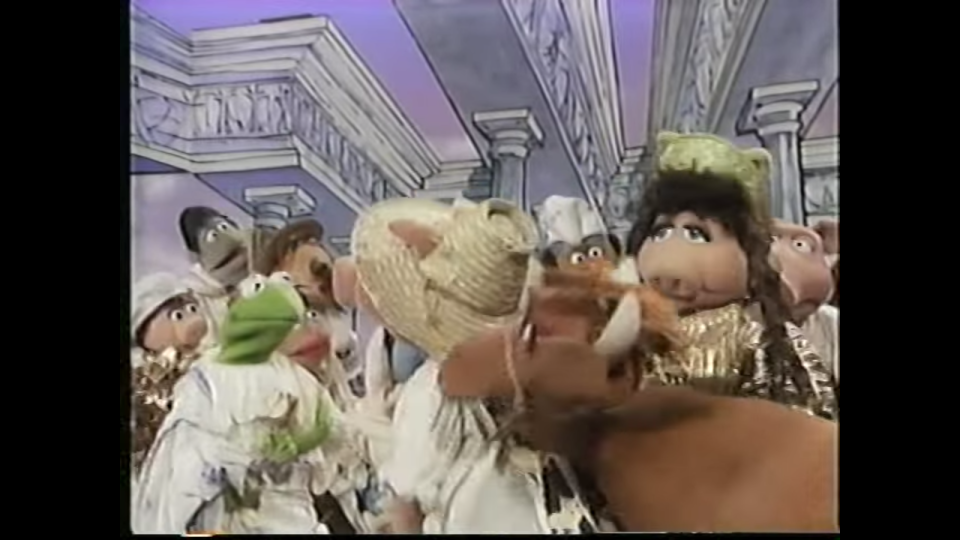 There are quite a few well done aspects to the visuals. The muppets themselves are well designed. I like the set designs too. They’re deliberately designed to look like something you’d see in a community theatre. The biggest issue with the visuals is the choreography  for the musical numbers. Yes, every fairy tale has a song attached to it and most of them are pretty lazy with the choreography. The first one we get has Miss Piggy and the other little pigs kind of wandering in circles while occasionally stepping forward to sing to the camera. The Rumpelstiltskin one pretty much involves the characters swaying from side to side. Yeah, I get that they’re working with puppets here but they could do something more visually interesting.

All in all, the acting is well done. Dave Goelz, Steve Whitmire and Frank Oz are all in their traditional roles, this was after Whitmire took over as Kermit. There is an awkward moment where Goelz takes over as Rizzo for a brief scene but it’s only for a couple lines and not a big issue. That being said, the musical numbers in this are weak. There have been a lot of excellent Muppet songs over the years. The Rainbow Connection, Saying Goodbye, Moving Right Along, I’m Going to Go Back There Someday, Together Again and many others. In this one, the songs are really repetitive and serve to hammer in the moral or a plot point. The only song I kind of liked was the parody one used in the last fairy tale. Aside from that, it’s just very lacklustre.

There are certainly things that could have been done better and there are better pieces of Muppets media out there. That being said, it’s not a bad little piece by any means. It has plenty of charm, some strong funny moments and it’s ultimately fun. If you’re a fan of the Muppets, consider giving it a look. For myself, I give it a solid 7/10.