I’ve talked about Studio Ghibli’s output a lot. In doing so I’ve covered the good, the mediocre & the Tales from Earthsea. This week, we’re covering their latest film based off of an English children’s novel.

Sasaki Anna is dealing with a lot. She suffers from social anxiety, self loathing and asthma. Plus her parents died without leaving her a mansion, butler and the money to study every conceivable martial art. Her adopted mother decides to send her to a more rural area for a while, hoping it will be good for her asthma. Once there, Anna finds herself drawn to an old, abandoned mansion. Strangely, the mansion seems to come alive during high tide and it’s there that Anna meets Marnie, a blonde, blue-eyed girl who makes Anna promise not to mention her to anyone.

The only real issue I have with the narrative is that the climax is a bit abrupt in terms of how it’s resolved. One moment Anna is actually mad at Marnie and in the next she’s completely okay.

There are a lot of positive aspects to the story. The pacing is largely well done. The subtle build up before Marnie shows up, the way Marnie and Anna build their friendship, that’s all great stuff. The whole theme surrounding mental health and Anna’s issues is well handled. You see a gradual improvement spurred on by her interactions with Marnie and it’s pretty heart warming. I’ll also credit them for foreshadowing the twist well. It might be obvious for those of us who are older, but it’s perfect for the target audience.

A big part of why the film works so well is that the characters are well written. Anna is highly sympathetic based on what she’s going through but she can also be quite nasty and lash out at others. Marnie is, similarly, a largely sympathetic character but we do get to see her mischievous side and her flaws. Even a character like Toichi who barely speaks has enough of a fleshed out personality to give him a good degree of verisimilitude. The interactions betwixt our leads are very well done and Anna gets some strong dynamics with some other characters as well. 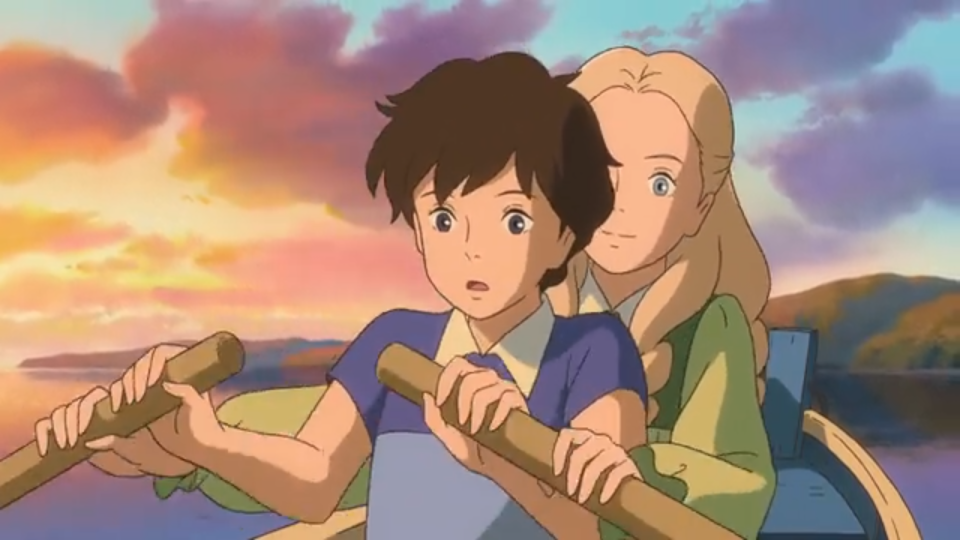 The performances are quite good. Especially from our leads, Takatsuki Sara & Arimura Kasumi. The soundtrack work was done by Muramatsu Takatsugu, who also worked on music for Mary to Majo no Hana. Like with that film, he does a solid job here. The music is well suited to Ghibli’s aesthetic.

There really isn’t any. While Anna & Marnie do forge a strong bond, they come across more like friends who have gotten close to the point of being almost familial. If there were a term for old friends who’ve just met, I’d use that to describe their relationship dynamic.

Omoide no Marnie is an excellent film. It may not stand with the very best of Ghibli’s output, but it’s pretty close. I’ll give it an enthusiastic 9/10.