I’ve talked about Madhouse’s Marvel anime a couple times before. There was Blade, which was decent, and X-men, which was a complete and utter pile of shit. Since we’re focusing on hero anime this month, it seems like an ideal time to delve further into Madhouse’s takes on super heroes. This time we’ll look at the first Marvel anime, Iron Man.

Our narrative opens with industrialist Tony Stark heading to Japan. His plan is to retire as Iron Man and get a reactor up and running that will provide free, clean energy to everyone in the nation. He needs plutonium to get it going, but it’s totally clean. Don’t question it. Things take a turn when Cobra… I mean Zodiac, a ruthless terrorist organisation bent on world domination arrives on the scene and begins making life difficult for Tony. We know all about them because they were in that Avengers cartoon I reviewed.

Let’s begin with what’s wrong with the series, and there’s a significant amount. The first noticeable issue with the narrative is that it’s very clumsy and inconsistent. To use an example, Stark seems confused in the first two episodes when the name Zodiac comes up but in the third he’s able to explain exactly what their organisation is like an expert with no explanation for how he learned all about it. Incidentally, the early villains introduce themselves as Zodiac but the others just show up and don’t say shit. Like Zodiac just decided “he gets it, no need to do that any more.” There’s also an episode where Tony takes great pains to get into space including attaching boosters to his armour and hitching a ride in a jet but very shortly after that his armour goes out of control and he just goes into space without any difficulties. I guess that’s all he needed, a lack of proper control. That makes things easier. Then we have the mastermind behind Zodiac. He takes great pains to try to deceive others and cover up his involvement but then he just says “fuck it” and makes a huge villain speech in front of everyone and we aren’t talking about the situation changes and then he does it. The situation is the same when he’s trying to frame Tony versus when he says “nope, I was evil the whole time.”

There are also a lot of issues that come up from Tony behaving in a way that makes no sense, but I’ll go into that in painstaking detail when I talk about how bad the characterisation is. I will say that another issue lies in how obvious the whole plot line is. You can easily predict every twist the story takes based on cursory experience with more action-oriented fiction. And it seems to be a deliberate decision because a lot of their reveals are just weak and lazily written as though the writers expect everyone in the audience to see it coming and are just rushing through it. It’s like they didn’t care.

I’ll start with the lesser character issues before moving on to the big one, which is our hero himself. First off, the antagonists are dreadful. Madhouse tries to go with the “well-intentioned extremist” route we see used in strong portrayals of characters like Magneto, or Poison Ivy. The trouble is, they’re really bad at it and we end up with villains who come across as bitter assholes who want other people to suffer because they have.

We also get the world’s worst reporter as a major supporting character. Seriously, this useless dumbass has no journalistic instincts. She gets an interview with Tony and can’t think of even the most obvious questions to ask him. Okay, he’s announced he’s retiring and that he wants to provide this free energy. You could ask “are you going to be subsidised for this energy and if so, how much will it cost the taxpayers?” “If the energy isn’t going to cause any pollutants, why are you using plutonium?” “If we aren’t going to be paying for this energy, how much is it going to be costing you and will it be sustainable?” You could also go with retirement based questions. “Who will be taking your place with the Avengers?” “Are you worried that your old enemies will decide to take revenge against you?” The point is, there are a lot of really obvious questions, Nanami.

Now, let’s move on to Tony. The big issue with him is that he comes across as completely insufferable and obnoxious. It’s like whoever Madhouse got to write this hates Iron Man and decided to portray him as an arrogant, lecherous, entitled moron. And this is supposed to be our hero. The one we look up to and care about.

Now, I did promise to go into details about the actions he takes that make no sense and they do tie into just how much of an idiot he comes across as here. There are a lot of examples and I want to talk about every single major one.

First off, he decides that he’ll retire. Now, in the comics when he did that he gave he Iron Man suit to someone he knew, trusted and who had acted as Iron Man to help him keep his identity secret. Which made sense and gave us James Rhodes, a fantastic character, to carry on the legacy. In this, he has three different dudes and they all have to share one suit. Why not have suits for everybody? To make things worse, Tony meets them for the first time during the series. So, how did he decide on them? Did he just tell his intern, Karen, to give the job to the three strapping lads who would look best in the armour? We’re expected to believe he cares so little for his legacy that he couldn’t be bothered to meet his replacements until after they’d been decided.

He also has his specialised new Iron Man Dio suit for these three guys to share, but he has no way to track it or shut it down if it goes missing or gets stolen. Which happens in the very first episode. He must have really trusted those three guys he never met before.

The second big one comes when he decides he’ll look into the loss of his plutonium shipment himself, in spite of the Japanese government telling him to stay out of it. Not only that, but he doesn’t use his high tech helmet to record everything he sees in order to give him some evidence of what happened if things go wrong. Things get even worse when he starts pursuing the culprits in his car. Not in the powerful armour that can fly and easily catch a speeding vehicle, in his car. Now, you might be thinking “maybe he was just being discreet” but that argument doesn’t work because he shoots missiles from his car at theirs. And he has to change out of his suit to get in his car and chase after them and then change back into it later which just makes it take longer for no good reason.

This is one aspect where I can mostly give the series credit. The Zodiac robots have interesting designs, the characters look good, except for Wolverine who has the same trash design he had in Blade. The action sequences aren’t great. They tend to be pretty one-sided, usually with Tony taking a beating before something happens that causes him to rebound and easily dispatch his foe. They aren’t bad though. 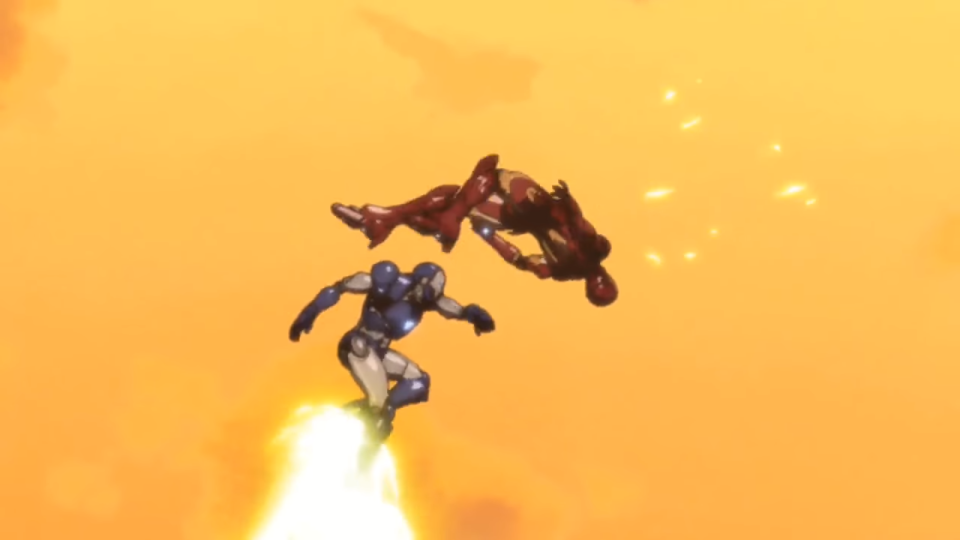 The acting isn’t bad. They got some strong actors, Itou Sizuka especially. Unfortunately, the writing doesn’t allow for strong performances and we end up with good actors doing passably. The music is kind of dull. Which has been a general thing with Takahashi Tetsuya’s soundtracks for all these Marvel anime.

There isn’t any. Tony is only lecherous towards women, including the ones who work for him because he is a major creep in this.

I know there are a lot more problems, but I think fixing those three would help immensely.

One thing I will say, this isn’t as bad as X-men was. It’s still pretty bad. It’s full of holes, Tony Stark is a complete wanker in it and it’s just not entertaining to watch. Ultimately, I give it a 3/10. If you want to see an animated Iron Man, I’d pick the old cartoon from the mid-90s over this.