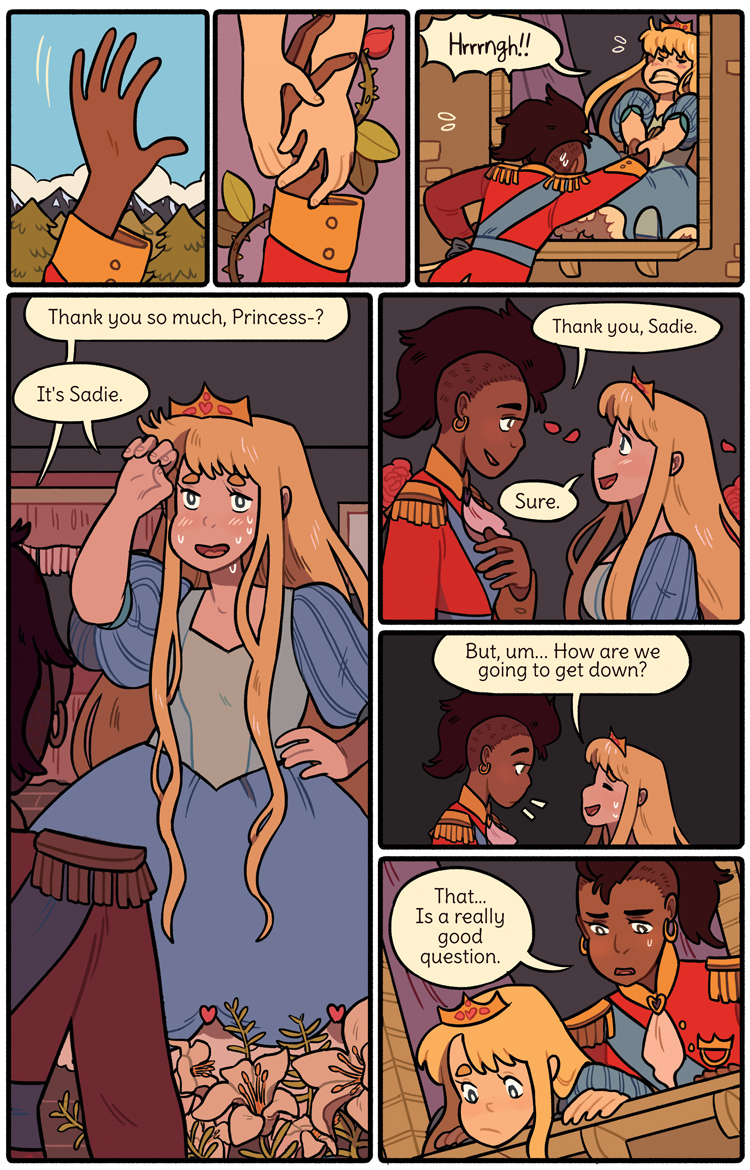 Princess Princess  is a family friendly graphic novel written and illustrated by Katie O’Neill. It was published in 2016 by Oni Press. It started as a web comic before that.

Princess Amira is riding her unicorn through the forest when she hears a maiden crying in a tower. Princess Sadie’s response to this is less than enthusiastic since many princes have tried. She asks what’s different this time. To which Amira responds “I am no prince and I have a grappling hook.” Thus their adventures begin.

The biggest issue with the book is probably just that everything is too easy. These ladies will encounter something that will seem like a possible threat for three panels and then resolve it with ease. Like the question of how to get down from the tower or the giant ogre. I get that this is a child friendly romp, but at the same time, children can handle some tension.

I will say, I appreciate the overall theme of moving beyond the role society’s chosen for you and finding your own place. We see all of  our major characters rejecting the boxes they’ve been put into in favour of their own paths. I also like the humour throughout. There are some delightfully funny bits of dialogue.

The characters are a bit simplistic but they’re also more than passable considering the target audience. The short arcs of rejecting the roles that were chosen for them adds some depth to their characters. Amira and Sadie have a cute dynamic. Maybe a little under-developed but it’s about the best you can expect given how short the story is.

The art is very cutesy. I’m not saying that as a bad thing. Truthfully, the aesthetic is quite nice. The character designs are pretty strong. The panel layouts are well thought out. The action flows quite well. About the worst I can say is that the backgrounds are a bit plain.

In terms of works for a younger audience, this one is pretty great. Clever dialogue, a positive theme, and endearing characters combine to make for an entertaining and very quick read. Which is why I’m going to give it a very solid 8/10. If you have a youngster in your life who could use a good story or you just enjoy reading simplistic stories, I can recommend it.