The Cockpit is an early 90s Madhouse OVA and it’s based off of a Matsumoto Leiji manga. I’ll be honest, I have never read or watched one of his works before. And I’m sure a bunch of people will say this is the wrong one to start with, but fuck it, we’re going live. 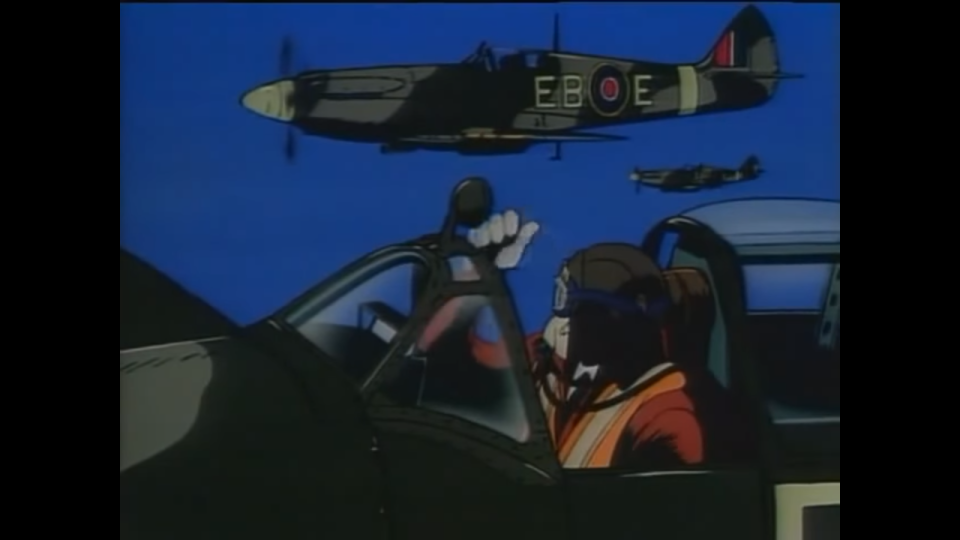 The OVA is basically made up of three different stories, each one about soldiers during World War II. I’ll probably go into the problems and high points for each episode individually before discussing the generals.

The first is about a Deutsche pilot who gets disgraced and then is offered a chance at redemption, by being the only escort for a very important delivery mission. The first question this brings to mind is why you would assign a post that important to a disgraced pilot. The second is why you would only have one escort. I get that they want to be incognito, but you’d think they’d still want more than one plane protecting their important cargo. Especially one plane with a pilot who’s already proven to be less than reliable.

The second is about a Japanese cherry blossom pilot who fails to properly crash his jet into the enemy thanks to the enemy’s pilots pushing their own air forces back. Therefore earning him one last day on Earth. Everyone is very sorry for their failure to deliver him. To the point where I wonder if he’s just a complete dick and they’re looking forward to being rid of him. (That was a joke, I know that’s not why they’re all sorry.)

The third is about some soldiers who find themselves as the last few in their unit after a massive bombardment and farcically try to return to a base that’s unlikely to have anyone left to keep a promise. This one just makes very little sense in any aspect when you think about it. If you know the base is overrun by hostile forces, why would you even attempt to get back there to meet up with people who are dead or have run away? Wouldn’t it make more sense to check an area they could have escaped to try and get word about them?

In terms of general issues, the big one is that the messaging is very heavy-handed. The first episode is very anti-nuclear weapon. The second really wants us all to know just how wasteful suicide bombings were. Is that really a hotly debated topic? I thought it was just objectively measured that they didn’t have much impact. For the third it seems to be a really weird way of conveying that you should pursue your goals wholeheartedly even if it kills you. And it all culminates in a really dumb, stilted piece of dialogue about racing.

I will give the series some credit for giving us shorts that are relatively watchable and do a decent job of keeping your attention.

Frankly, none of the characters have much in terms of complexity or development. They’re all pretty much equally a bit shit. At least they aren’t actively terrible or annoying. That may not be much, but it’s something.

The big problem with the art is that the characters range from looking perfectly normal to looking like the cast of Osomatsu-san and, to point out the very obvious, that art style doesn’t really work in anything that’s trying to be remotely serious. You can’t give me a “tragic” death scene with a character who looks to be out of an old gag anime and expect it to have any real impact. I will say that the planes and boats we see look good and the air battles are really well done.

Are the performances good? Well, no. While they got some good actors like Midorikawa Hikaru or Horiuchi Kenyu but they don’t really have complex enough characters to really give stellar performances. So, what we end up with is pretty mediocre. The music is fine. Not good, but decent.

There aren’t any characters with compelling interactions, homo-erotic or otherwise.

The Cockpit has some serious flaws. It’s not a bad little OVA, but it’s also definitely not a good one. I can’t even call it average. Ultimately, it’s a bit below even that. So, I’m giving it a 4/10. If the premise sounds really interesting to you, go for it. If it sounds only like it could be interesting if well executed, I wouldn’t bother.